An Australian property developer has today highlighted the continued strength of Sydney’s property market which has reached 9.4 per cent annual growth after recording an August growth rate above the national average.

The home value index of Australian cities month released this month by CoreLogic revealed Sydney dwelling values increased 1.4 percent month to month in August versus a national average of 1.1 per cent.

“Compared with many global cities, Sydney offers stronger growth prospects for property owners; backed by a stable government, strong education market and a demand for housing which outstrips supply. 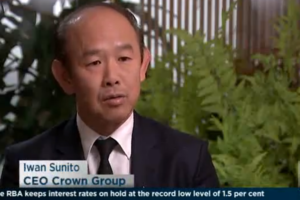 “A new record low on interest rates has helped many local buyers come ‘out of the wood work’,” he added.

“The demand for our existing and upcoming developments is very strong with the majority of sales coming from the local market; in other words, Australian citizens and residents,” Mr Sedgwick said.

Capital gains in Sydney remained stronger compared with other capitals and contributed significantly to the national rise; the report also showed.

Canberra and Hobart recorded increases in dwelling values of 7.6 percent and 6.5 percent respectively in the past twelve months, however these markets still trail well behind Sydney, Mr Sedgwick said.

Designed with innovative use of green space, Waterfall by Crown Group located in the Sydney-suburb of Waterloo is set to become a benchmark in high-rise residential design.

“To date we’ve had strong interest in Waterfall by Crown Group; with a high number of enquiries many of whom are repeat and loyal clients of Crown Group here in Sydney,” Julian added.