One of Australia’s most respected chefs has revealed he will soon expand his restaurant collection to Parramatta.

Renowned chef and restaurateur Neil Perry AM has announced that the striking V by Crown Group tower, known as Parramatta’s vertical village, will be the location for his next Burger Project. 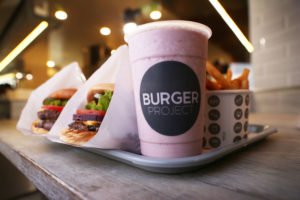 Burger Project Parramatta is set to open in early 2017 and will feature all the elements that have made Burger Project a success to date including a smart casual feel with a large open kitchen and relaxed seating for 100 guests, and an enticing menu with 10 different burgers, fries, ice cream desserts, shakes, house sodas and a small, hand-selected list of wines and beers.

“Neil has established an enviable reputation for his burgers and many people have been waiting for him to bring Burger Project to Western Sydney,” he said.

Neil Perry is equally excited. “Parramatta has such a diverse and emerging food and cultural scene and we cannot wait to add Burger Project to the mix,” he said.

Recently awarded an international architecture award for its modern design, the 29-storey V by Crown Group will include 590 apartments and hotel suites, a swimming pool, gymnasium, library above a large retail and dining plaza and a unique archaeological display on ground level.

The tower will also be home to Parramatta’s highest bar located on level 26, with sweeping views of Parramatta’s Heritage parklands, Sydney’s CBD and Sydney Harbour Bridge.

The building, due for completion early next year, is located on one of the city’s prime commercial sites; corner of Macquarie and Marsden streets less than 300 metres from the new Parramatta Square and 500 metres from Parramatta train station.

The latest announcement comes after Parramatta City Council has placed new focus on the area with extensive investment in Parramatta Square – set to drive foot traffic to the area.

Crown Group will announce additional retailers for the luxury development later this year.

Residential apartments within the V by Crown Group development are now available to buy including studio, one-and-two-bedroom apartments and three-bedroom penthouses priced from $486 000 to $2 295 000.

Love sports? Eastlakes was once a horseracing site and is now home to four major Australian golf courses. With Eastlakes Live by Crown Group just minutes away, you will be even closer to fulfilling your pro golfing dreams.domain.com.au/news/sporting-…

Each year The Economist ranks the World's most liveable cities according to a range of complex factors. So why wouldn't you buy in a top rated city? The research has been done for you, now you just need to find an apartment you love.crowngroup.com.au/news/luxury…