Positioned in the heart of Parramatta, the stunning structure better known as Parramatta’s Vertical Village rises up on two V-shaped columns, each standing a striking three storeys tall; ensuring key elements of Parramatta’s historical and cultural past including the remains of an 1840s convict house and underlying convict hut found during excavation are kept and displayed for public view. 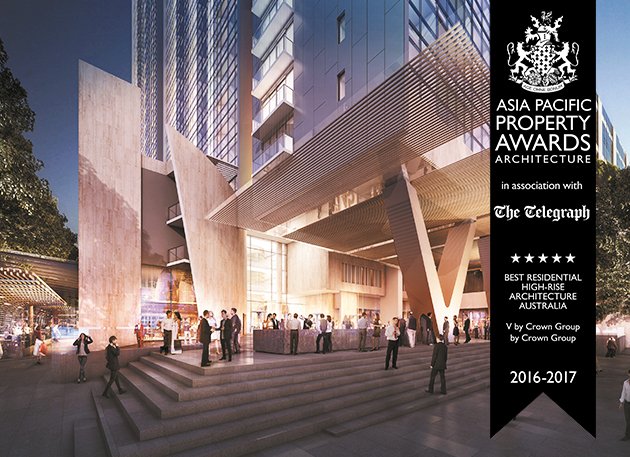 Particular care has been taken with the bar’s acoustic treatment, public access, servicing and optimal use of space; resulting in an expansive 275sqm internal bar area, double height ceilings, a large outdoor terrace and a stunning glass wall forming a unique backdrop behind the bar service area designed to take advantage of the bar’s sky-high position.

The tower’s lower levels feature a grand cathedral-like lobby with a four-storey high atrium space and a retail-and-dining plaza,

“V by Crown Group goes beyond the ordinary to deliver a 21st century urban lifestyle experience in the second oldest city in Australia,” Mr Sunito said.

“We strive to push the boundaries of conventional design, to create a revolutionary, breakthrough buildings.

“This award is a recognition of V by Crown Group’s unique design,” he added.

Mr Sunito, who is also an architect, has often expressed his desire to use innovative designs rather than to simply follow designs of the past.

Designed by international architects Allen Jack + Cottier (AJ+C) in collaboration with the Japanese-born architect, Koichi Takada, V by Crown Group is is set to become distinct new landmark in Australia’s second oldest city, located on the corner of Macquarie and Marsden streets Parramatta.

Three expansive luxury penthouses occupy the two highest levels of the building, some of the most exclusive positions in Western Sydney. Each penthouse is set over two floors and includes three bedrooms, a study, two bathrooms, a guest powder room, open-plan kitchen, indoor-outdoor living area, two car spaces and a large balcony.

“The landmark tower which has become known as Parramatta’s Vertical Village provides truly glamorous high-end level of apartments that matches the lifestyle of those new residents of Sydney’s second CBD,” Mr Sunito.

The International Property Awards celebrate the highest levels of achievement in the property and real estate industry; judged by experts from across numerous property disciplines including architects, designers, and journalists.

Entrants in the High-Rise Architecture category are judged on design brief and site considerations, location, architecture and use of space, appearance and finish, sustainability, safety and security.

After more than 20 years developing luxury property in Sydney, Crown Group has carved its own place in the Australia’s property landscape, contributing more than a dozen forward-thinking buildings to Sydney’s skyline including in Bondi, Bondi Junction, Parramatta, Ashfield, Epping, Homebush, Newington, Pennant Hills, Ryde and Rhodes and Waterloo.

The award is the fourth International Property Award for the company, awarded the Best Residential Development in 2014 and 2015 for Arc by Crown Group in Sydney’s CBD and Top Ryde City Living respectively and Best Development Marketing Australia 2014 for Skye by Crown Group in North Sydney.

V by Crown Group is scheduled for completion in early 2017.

Love sports? Eastlakes was once a horseracing site and is now home to four major Australian golf courses. With Eastlakes Live by Crown Group just minutes away, you will be even closer to fulfilling your pro golfing dreams.domain.com.au/news/sporting-…

Each year The Economist ranks the World's most liveable cities according to a range of complex factors. So why wouldn't you buy in a top rated city? The research has been done for you, now you just need to find an apartment you love.crowngroup.com.au/news/luxury…